Skip to content
You are here:Home>Home Soundproofing>How to Stop Wind Noise in a Chimney for Under $50

How to Stop Wind Noise in a Chimney for Under $50

I used to live in an old house in the countryside. We had a lovely fireplace, but it tended to whistle and howl with wind. We would also get a really scary banging noise in the chimney when it was very windy.

Not only was the noise irritating, but it would also mean that embers were blown into our living room – which obviously was very dangerous.

I found an ingenious way of preventing the wind noise in our chimney which I would like to share with you.

You can read how I soundproofed and reduced my chimney noise, plus some alternative recommended solutions. I include links where you can buy the products cheaply on Amazon.com.

Step 1: Use a Chimney Balloon

This is the under $50 solution that I recommend.

The manufacturers of chimney balloons claim that they will keep the warm air in, and the cold air out – including any wind noise coming down. Chimney balloons work like vacuum cleaners, as they will suck air out of the space.

This means that cold air is effectively blocked from getting in, meaning that wind noise can be reduced significantly – plus your home will be warmer and it’s more economical due to heat being retained in the room, rather than escaping.

Due to the thick cushion of air that the balloon creates, it’s possible to absorb sound. It does depend on how much sound is coming down, but it should deaden noise effectively.

I have used this product successfully, and really like the science behind it – plus the online reviews are really good. It’s simple to use, you just inflate it and it will stick inside of the chimney.

It would appear to be a great way of not just answering the question of how to reduce chimney noise, but will also keep rooms warmer so is doubly beneficial.

It’s relatively cheap too, retailing at under $60 dollars. You can buy on Amazon.com now whilst still in stock and at a low price.

This is another under $50 solution.

You can use a flueblocker to prevent noise and wind, as it will seal and insulate your fireplace.

Again, it’s easy to fit, as all you do is push it into the narrow part of the flue just above the fireplace, and is something anybody can do themselves.

But you should only use this product when you aren’t using the fireplace and a fire isn’t lit.

The best-selling flueblockers on Amazon are the Chimney Sheep range (round ones or squares ones depending on flue size) which are made from sheep’s wool and come with a handy plug handle for easy installation and removal. You can take it in and out as many times as you like.

A more expensive but robust solution is a chimney cowl. They can be purchased for under $100 but you will probably need it fitted professionally due to it being positioned on the top of a chimney stack.

A chimney cowl is sometimes referred to as a UFO in the trade (look at photos and you will understand why). All it is, is a type of cap that fits inside of the pot at the top of the chimney. I kind of liken to a pot with holes in it.

A chimney cowl will keep the ventilation so that smoke can still escape from the chimney. But the benefit is that it cuts down and prevents wind noise from coming down the chimney.

I would recommend trying chimney cowl noise reduction products, and the one that I have used successfully in the past would be from the Colt Owls range on Amazon.

You will need to get one that fits the correct dimensions though, so I have linked you up on Amazon to the entire chimney cowl selection so you can decide for yourself which one fits your home. Prices range from $30 all the way up to $300.

This product is easy to fit, but you might want to employ a handyman to do so, as climbing on your roof with ladders can be very dangerous, and I would not recommend it unless you are experienced in doing so.

The cheapest and quickest way in which you could look at preventing wind and banging noise is a bit of a hack, and that’s using a towel. But I don’t recommend you do so, and here’s why:

If you use a towel to block the chimney it means you can’t actually use light a fire so is only something that you would sensibly do in warmer months.

Doing this is a massive fire risk, and should never be done if you are planning on lighting a fire. Not only are you at risk of the towel setting alight, but also of smoke coming back into your home.

Chances are that you could forget you wedged the towel in, so please take due care and attention. I have never used this method myself. It’s just something that I read a person on a web forum having done to save money and stop wind noises, but I certainly don’t recommend it at all.

Why is There Still a Banging Noise in my Chimney When Windy?

Aside from wind noise, you could also be experiencing banging. This typically occurs with air-cooled chimneys. The reason being is that they have two layers of metal pipe with spacers in between for air flow.

If the spacers get bent, which can happen over time, then the inner metal layer can bang inside against the outer layer.

With cases such as this you will need to employ a specialist contractor to fix any issues, as there is no quick or cheap fix for stopping this problem.

If like me you want to stop howling wind noises coming down your chimney, then definitely try the balloon product yourself in conjunction with a Chimney Sheep flueblocker.

Anybody can do it, and they are cheap products so no harm in testing them out.

If all else fails, look to get a cowl professionally fitted.

I would love to hear from any readers who have alternative solutions on how to soundproof a chimney as I am sure there are other methods out there that some bright spark has thought up!

Find Out What You Need

I’ve compiled a list of tutorials. Click the button below to find out what you will need for any soundproofing project on a budget. 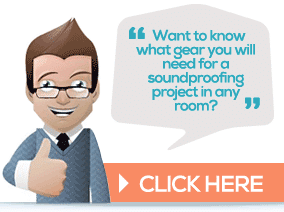